Has anyone seen my husband?

Well, I haven’t seen my husband in days!  That is maybe an exaggeration.  I have seen him, but only from a distance as he is a man obsessed with a van.

He’s been really busy doing some pretty neat stuff out there on the lawn in his make-shift shop.  And as much as I have been hoping to get him to do some technical writing about how he’s actually completing these projects, its pretty hard to get him away from the van long enough to eat breakfast let alone get any meaningful writing out of him.  So I will be doing the best I can to update those out there in “Van-Land” on our progress.

Since the last van update, a lot of our to-do list has been checked off…

All grip, no slip!

After stripping the van down to nothing, we insulated the side panels with some denim insulation. The existing laminate flooring was removed and replaced with this super neat rubber flooring. We got this flooring for a wicked deal – as in FREE!  It was leftovers from our friend’s gym remodel and when we saw it we knew we wanted to try it in the van.  We are thrilled with the outcome because the flooring really cancels out road noise, it is thinner than the previous flooring which gives us just a smidge more height in the van (anything helps).  But the biggest plus for me is the fact that it is non skid and our silly baby of a pit bull doesn’t slip and slide all over the floor!

The Rubber floor can be purchased here:  www.greatmats.com 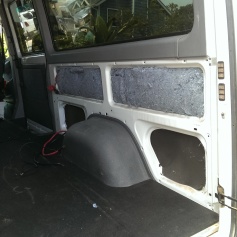 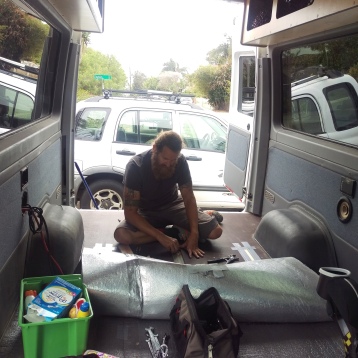 Puling up the floor.

Let there be lights!

After installing all of our neat new storage cubbies (read more about that here), it was time to get a ceiling back up.  We insulated the ceiling with this FatMat Self-Adhesive Sound Deadener Insulation, and opted not to include any of the denim insulation in the ceiling.  We don’t do any extreme weather, so for now we decided it wasn’t necessary. There is denim insulation hiding behind the cubbies though. Instead of the old pine boards we opted to put up a simple sheet of luon.

Ron wanted to make sure that whatever went up, would be easy to take down again in the event that wiring hidden behind it needed to be adjusted for new accessories.  Speaking of wiring behind that luon ceiling — we have lights now!  We installed six of these Warm Recessed LED Lights above the bed. In between those lights are D-rings which give us some tie points for hauling things like surfboards inside the van. Looks pretty nice huh?!

A place for everything!

Ron hacked the bed platform down a full six inches to expose the windows completely — It sure is nice to be able to lay down and look outside!  While chopping that six inches, he completely reworked the platform itself to better organize the components that are housed underneath the bed. Everything from camp chairs to folding tables have a special home now!

A nice look at how Ron cut some weight out of the cabinetry.

The drawer is about to go back in.

The drawer is in, but not finished.

A whole lot of wiring.

So, what all is under the bed?

STORAGE DRAWER: When we bought the van there were two large drawers, but after the big six-inch chop we now only have one. Ron reworked the existing drawer and added a new face to match the cubbies.  Since his discovery of this T-Molding it gets put on everything and it makes all of our cabinetry look really professional and finished. 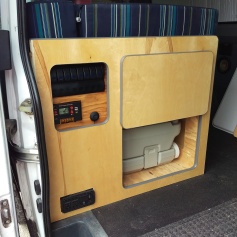 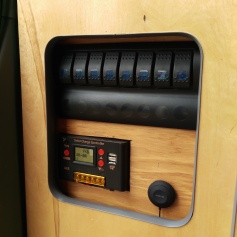 Drawer and potty underneath.

POTTY:  We have this Portable Toilet

which is tucked away under the drawer and is accessible from the inside of the van for emergencies on the road and camp outs.

now controls all of our accessories, from the Maxxair Roof Fan

, to the above bed lights.  We replaced the Solar Panel Regulator that was in the van with this one

which is a bit smaller than the old one and has a nifty USB plug-in it.  It also has various voltage and amperage read-outs which allowed it to also replace the separate battery monitor that was in there previously.

BATTERIES:  The batteries have a special home on a shelf built above the wheel well and are neatly housed in battery boxes.  We bought these battery boxes

off Amazon, but Ron had to do a little bit of customization to make them fit.

WATER TANK:  For now we are sticking with one 13 gallon water tank.  We have space to add a second if we feel its necessary.

TABLE AND CHAIRS:  Check out this special pocket Ron made to hold the camp table!  And our Lafuma Chairs

slide neatly into a pocket above the fridge!

FRIDGE:  Previously, the ARB fridge was housed in the front of the van, and pulled out behind the passenger seat.  We moved that fridge to the rear of the van, and its former place now is home to the electronics command center.

The Fridge in its new home at the rear of the van.

A nifty little pocket to hold the folding table.

Hey, what about the stereo?

Glad you asked!  We canned the car stereo that was in the van in favor of a Kinivo

bluetooth controller plugged directly into a 300 watt mofset amplifier. This allows us to control the sound system directly from our phones or laptop. So yes, now we have a hole in our dash, but the system is actually a lot simpler, no confusing stereo adjustments.  As far as speakers go, we pieced together some new and old parts which Ron built directly into the headliner of the van.

There are a few projects still up for completion before we head out on our big summer road trip:

***There are affiliate links scattered throughout this post. We work hard to curate blogs based on items we use and love, and sometimes we do get a teeny-tiny percentage from items sold through those links.